Life isn’t linear; it is irrational and irregular, made up of feelings, moments and memories that don’t always fit together. But, somehow, we’ve got to make sense of it all, and that’s just what Lisa, played by Jo Gerard, is trying to do in To The Dam, a new one-woman show from writer and director John Clarke. 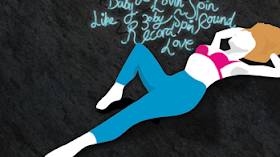 A middle aged mother of one living in Todmorden, Lisa's life has not been easy. She's lost close connections, suffered through an abusive marriage and has a difficult teenage daughter who she does daily battle with. But, throughout it all, she's had the dam: silent and unchanging, it is a place to find peace, pleasure and, perhaps, acceptance.

The structure of To The Dam is discontinuous, with present-day narration inter-spliced with recollections of past feelings, thoughts and conversations. Not everything Lisa does is likeable, but her actions always make sense in the context of her character, whether that is re-enacting a fight, recalling an old song or remembering how love used to be. Her language is by turns hard, pretty and poetic, creating a vivid world that feels so real you could almost step out of your seat and into the scene, with the words rising around you like the water of the reservoir itself.

To bring such disparate parts of a person's persona together, knitting them into a cohesive whole, is a very impressive achievement. Whether her face is contorted with hatred, her voice trembling with emotion or her limbs lost in the joy of movement, Gerard is always utterly engaging as Lisa. The direction plays a big part in this, Clarke and Gerard clearly forming a fantastic working relationship both with each other and their character. Further flourishes, such as the use of lighting to create a tripartite shadow of Lisa on the rear wall, accentuate the performance.

To The Dam has a deep empathy for the impact of events on one woman’s life, and great credit must go to Clarke for his skilful writing and subtle understanding of the subject. This is a great play, with a stunning performance that will stay with me for some time to come.